Glenn Leonard's Temptations Revue brings the sound of perhaps the most successful soul band of all time to Berlin. In their "60 Years of Motown Gold" show, the musicians present all of the Temptations greatest hits. 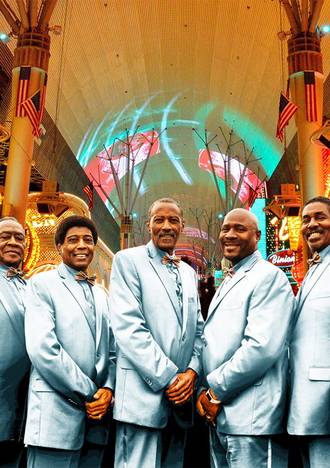 The planned concerts with The Temptations Rev. feat. Glenn Leonard & Joe Herndon could be successfully postponed one year after October 2021 due to the COV-19 pandemic. Important: Already purchased tickets remain valid!
The Temptations: one of the most successful soul bands ever
No other group in the history of soul music can boast a similar record with an astonishing 42 top ten hits, 14 of which reached number one in the charts. The Temptations thus coined the term "Soul Music Made in USA". In 1999 The Temptations were inducted into the Vocal Group Hall of Fame and are still considered the best American soul band of all time.
Experience the exceptional musician Glenn Leonard
Glenn Leonard has been the lead singer of the Temptations Revue since 1975 and has produced over 10 albums with the supergroup. In 2013 he was inducted into the R'n'B Music Hall of Fame. With vocalist Joe Herndon (bass), the Temptations sound continues to groove in concert halls around the globe.
The show highlight from Las Vegas comes to Berlin
The Temptations Revue is currently in top form with their Las Vegas show. The big anniversary "60 Years of Motown" in Berlin is an encore to last year's extremely successful greatest-hits tour of the successful show. Look forward to a great concert evening with soul evergreens like "My Girl", "Papa was a Rolling Stone", "Treat her like a Lady", and many more.

Glenn Leonard's Temptations Revue brings the sound of perhaps the most successful soul band of all time to Berlin. In their "60 Years of Motown Gold" show, the musicians present all of the Temptations greatest hits. more