Already at the age of 18 he toured Europe with the son of Muddy Waters, in spring 2022 the singer and multi-instrumentalist Neal Francis will come to Germany for the first time as a solo artist. 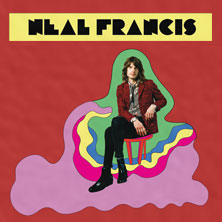 After the concerts originally planned for April 2020 had to be postponed due to the known situation, the replacement dates for Neil Francis are now fixed. In the new tour schedule, all Germany dates can be made up and there is even one more date in the Haldern Pop Bar on January 31, 2022. Already purchased tickets keep their validity. Under the motto "Let's Try It Again," Francis plans to play more shows in the UK, the Netherlands, France and Belgium in addition to his concerts in Germany in 2022.
At 30 years old, Neal Francis has already lived several lives. But the Chicago-born musician is celebrated by the media not only because of that, his music is in the foreground. Craig Charles (BBC Radio 6) thinks he's the "reincarnation of Allen Toussaint," radio station KCRW reminds him of Leon Russel, Dr. John and JJ Cale, the Winnipeg Free Press sees him as "an artist to absolutely pay attention to" and Cincinnati CityBeat talks about "classic funk, soul and R&B."
"I just want to be honest in everything, from my musical influences to my story," Neal Francis explains. Because after years of drug use he has freed himself again, used the music as therapy: The reminiscent of the long-gone heyday of R&B, but does not stop at new influences. There is a deep connection between the sounds of his childhood (Dr. John) and other role models like Allen Toussaint and Leon Russell, the pub rock of the Rolling Stones, the gospel soul of Billy Preston and the roots music of The Band.

Known for her electrifying performances, Akua Naru has graced the stages of more than fifty countries on five continents, making her poetic messages heard in the fight against racism, discrimination and gender-based violence. more

With songs like "My Girl", "Papa Was A Rolling Stone" or "Baby I Need Your Loving", The Temptations created timeless classics and are considered today as the pioneers of soul. more