The legendary punk rock band The Offspring is coming to Germany with their "Let The Bad Times Roll" tour to finally present fans the eponymous album live in 2023. 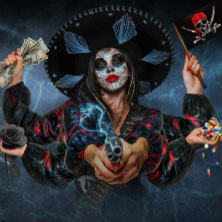 The current long player "Let The Bad Times Roll" was released in spring 2021. In the period from May 14 to 22, 2023, four concerts in Munich, Berlin, Hamburg and Düsseldorf are on the tour schedule.
The Offspring, considered by many to be one of the best punk rock bands of all time, are known for their distinctive sound as well as biting commentary on the state of society. The multi-platinum band achieved their global breakthrough with their 1994 album "Smash," which has since sold more than 11 million copies. One hit after another followed, and The Offspring made punk rock socially acceptable even in the mainstream. For the band, this means more than 40 million records sold, numerous shows in full stadiums and a huge fan base worldwide.
"Let The Bad Times Roll", the band's tenth studio album, is their third long player produced by the legendary Bob Rock. With the bluntness typical of punk rock, The Offspring and their lyricist Dexter Holland have devoted themselves to cultural phenomena of our time on it and have not shied away from taking up red-hot topics. "This album is perhaps the most cathartic thing we've done to date," Holland says. "But even though the messages may be pretty bleak, what should stick in the end is how important it is to keep communicating, face your feelings, and above all, never lose hope."
As part of the Let The Bad Times Roll Tour, The Offspring will loudly convey their message: in May 2023 also in Munich, Berlin, Hamburg and Düsseldorf!