The Scorpions' new album "Rock Believer" was released on February 25 and proves the legend status and compelling relevance of Germany's greatest rock band of all time with outstanding chart success. 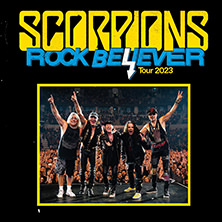 Arena concerts in Germany postponed to 2023. Tickets already purchased remain valid.
It is with a heavy heart that we have to announce that due to the ongoing pandemic and the associated planning uncertainty, all Germany dates of the Rock Believer tour will unfortunately be postponed to May/June 2023. As tour promoters, we share the disappointment and frustration with all fans in Germany, but unfortunately we see no way to get around this decision.
The Scorpions will now play in Dortmund on May 14, 2023 (Westfalenhalle), in Mannheim on May 16, 2023 (SAP Arena), in Hanover on May 19, 2023 (ZAG Arena), in Stuttgart on May 21, 2023 (Schleyer Hall), in Berlin on May 23, 2023 (Mercedes-Benz Arena) and in Munich on June 5, 2023 (Olympiahalle).
"As much as we all hoped to celebrate the return of Germany's biggest rock band to domestic stages this spring, we unfortunately have no choice but to postpone the Rock Believer Tour in Germany until 2023. The existing planning uncertainty makes it impossible to carry out an arena tour, which has to be planned far in advance with such an immense logistical effort. Even though many are hoping for March 20, we bear the responsibility for hundreds of people who work passionately to make a rock production of this magnitude possible. It is not right at this time and the current situation is too unsteady. We hope for the understanding of the fans and firmly believe in a great tour without ifs and buts in 2023!" Ossy Hoppe, Wizard Promotions.