Peter Gabriel has announced his first European concerts in almost a decade for 2023. As part of the "i/o Tour", he will present new songs from his next album as well as his incomparable music catalog of hits, fan favorites and the unexpected. 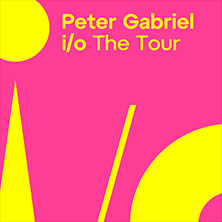 In concert, Gabriel will be joined by his regular bandmates Tony Levin, David Rhodes and Manu Katche.  These are the first solo shows outside North America since the Back to Front Tour, which celebrated the era-defining album of the same name. Live Nation is producing the 22 performances, including five dates in Germany.
Peter Gabriel gained worldwide notoriety with the success of Genesis, the band he co-founded while still in high school. Since leaving Genesis in 1975, he has released eleven studio albums, five soundtracks for Alan Parker's 'Birdy', Martin Scorsese's 'The Last Temptation of Christ' and Philip Noyce's 'Rabbit Proof Fence', and numerous live cds. Milestones of his career include multiple Grammy Awards, the creation of the world-renowned Real World Studios, the Real World record label, and in 1980 the creation of WOMAD, the festival that influenced the careers of so many artists from around the world and just celebrated its 40th anniversary.
Peter Gabriel co-founded the human rights organization Witness(Witness.org) in 1992, pioneers in the use of cameras and technology in human rights campaigns. In 2007, he created The Elders (theelders.org), launched by Nelson Mandela, alongside Sir Richard Branson. In 2006 he received the prestigious "Man of Peace" award from the Nobel Laureates and in 2008 Peter Gabriel was in the Time 100 list. He has twice been inducted into the Rock & Roll Hall of Fame.

Next date: /o The Tour

Céline Dion will stop in almost 100 cities worldwide on her Courage World Tour - including Berlin, of course. more

2023 will be a very special year for Max Raabe and his Palast Orchester - everything will be new! more

P!NK is back! The global pop icon has announced four stadium shows in Germany as part of a 2023 European tour. more