Frank Carter and The Rattlesnakes - Let’s Get Sticky Tour 2022

In spring 2022, fans can experience Frank Carter and The Rattlesnakes live on tour in Germany. 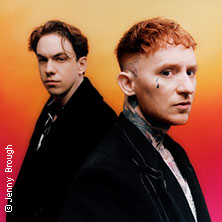 Frank Carter and The Rattlesnakes – Let’s Get Sticky Tour 2022

To celebrate their new album "Sticky", which will be released on 15 October 2021, Frank Carter and The Rattlesnakes will go on tour in Germany in spring 2022.The band from Hertfordshire recently announced their return with the current single "My Town", which was created in cooperation with Joe Talbot from The Idles. "My Town" is a metaphorical look at the disintegrating collective mental health of a nation after a spate of lockdowns and social isolation. Imagine each person as a town with its inhabitants. The city represents the mental stability and well-being of that person. "It's easy to distance yourself when it's someone else's problem," says Frank Carter about the new single. "But each* of us is responsible for keeping the streets clean, looking out for our fellow human beings and acting with kindness and respect as we go through life. We can take a look at this city and also see all the dirty things like filth and contempt. And then we are reminded that 'My Town' looks just like yours and that we need to take care of ourselves. Otherwise we will soon be in big trouble".
For the first time in the band's career, this song was produced by guitarist Dean Richardson. Frank Carter and Dean Richardson thus deliver an incendiary result that cements the duo as one of the most important partnerships in British rock music.
Frank Carter and The Rattlesnakes made their debut in 2015 with "Blossom". The successful debut was followed two years later by "Modern Ruin" and most recently "End Of Suffering". The band has always been known for wild live shows and a clear stance. With his vital voice, Frank Carter rages against injustice, right-wing politics and toxic masculinity in his songs. In "My Town", too, the musician is critical of society.
The band's fourth album will finally be released in autumn. The directness and immediacy of the title single, which blasts out of the loudspeakers, already reveals what we can expect from the new work: Blaring and short punk rock anthems in which Frank Carter sounds like an untamed force of nature.
It seems as if "Sticky" is the acoustic eruption of the suppressed energy of the past year. Now Frank Carter and The Rattlesnakes let out this very energy in old punk style. "People said to me that when they listened to the record they felt their youth. When you produce albums, these are the ones you want to make. Nostalgic, but classic. Timeless, but also modern," says Frank Carter about album number four.
In January and February, the band will bring their excess energy back to the stages and play four concerts in Cologne, Berlin, Hamburg and Munich.

Next date: Frank Carter & The Rattlesnakes - Let’s Get Sticky Tour 2022