With their "No Shame Tour" the successful Australian band 5 Seconds of Summer 2021 returns to the German stages with new songs. 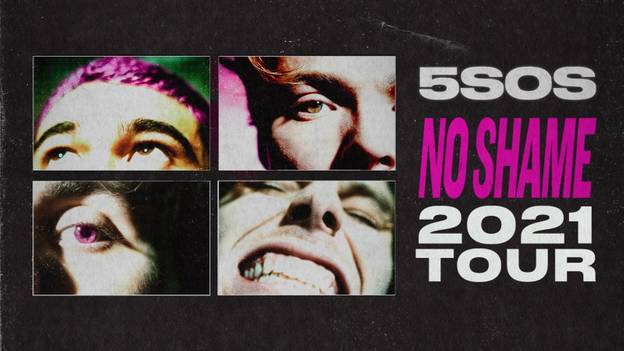 5 Seconds of Summer, one of the most successful Australian bands of all time, return to the stages of German arenas in 2021 with a new album. In Hamburg, Düsseldorf, Berlin and Munich, the chart breakers from Down Under will perform their greatest hits as well as brand new songs and provide a lot of enthusiasm and hoarse throats.
The successful band from Sydney
5 Seconds of Summer - these are Luke Hemmings (vocals, guitar), Michael Clifford (vocals, guitar), Calum Hood (vocals, bass) and Ashton Irwin (vocals, drums) from Sidney, Australia. Founded in 2011, the quartet's sound managed to bring the raw energy of punk into pop and become a global phenomenon in just a few years. Their first three studio albums all made it to the top 1 of the US Billboard Charts - a feat that no artist had ever achieved before.
Australian pop rock in the fast lane
In 2014 her surprisingly successful debut "5 Seconds of Summer" was released, which directly led to her international breakthrough. In 2015, "Sounds Good Feels Good" followed, which was to top the whole thing once again, and in 2018 her last album to date, "Youngblood", her most successful longplayer to date, was released. With songs like "Youngblood", "Who Do You Love", "Easier" and "Teeth", the four Australians also stormed all streaming services, reaching over 26 million monthly listeners and 2 billion streams worldwide on Spotify alone. As a result, they have received over 50 awards, 120 nominations for Brit Awards, American Music Awards, Billboard, MTV and Teen Choice Awards, as well as platinum and gold awards, a huge international fan base, sold-out tours and a life in the fast lane.
During the "No Shame Tour 2021" the band presents their new album
For 2020 5 Seconds of Summer have announced a new album and it is said that it is already finished. The two singles, which can already be heard, give hope for great things. "Easier" was released in May 2019, 3 months later came "Teeth", which can be heard on the soundtrack of the Netflix series "13 Reasons Why" among others. Here you can already guess what the four mean when they say that they want to expand their sonic as well as lyrical spectrum on the new album and realize their musical vision with more intensity than ever before.
After their last world tour in 2018 as well as a series of shows with the Chainsmokers in the USA, 5 Seconds of Summer 2021 is finally coming back to Germany for four concerts. During their shows, the enthusiasm of the fans and the energy of the band on stage will certainly be discharged in unforgettable evenings.