Italy's star tenor Cristian Lanza presents the most beautiful choirs and melodies from the operas of Guiseppe Verdi: Nabucco, The Troubadour, Rigoletto, La Traviata and Aida. 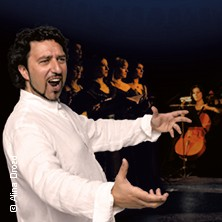 "All music has its heaven", Verdi once said. His music was created under the clear sky of "Bella Italia". Verdi's music arouses strong emotions, but always remains real and true - and beautiful, as beautiful as the sky over Italy.
In many of Verdi's operas there is one, very special hit. World-famous are the prisoners' choir from Nabucco, the "Preghiera di Desdemona" (Ave Maria) or "Ella giammai m'amò". They belong to the most poignant that European music has ever produced.
Verdi wrote twenty-six operas during his long life and perfected his mastery from one work to the next. Nabucco, La Traviata, Rigoletto, Il Trovatore or Aida are masterpieces from the first to the last bar. The most beautiful of the inexhaustible wealth of great overtures, choirs, arias and duets has been selected for this production. Verdi's immortal music in rousing interpretations, performed by star soloists, choirs and the great orchestra of the Milano Festival Opera - that's Verdi Night!
Star tenor Cristian Lanza sings Verdi's masterpieces
With a lot of talent and even more feeling Cristian Lanza knows how to give his voice wings. The Italian tenor, born in Rome, has been one of the greats of the scene for quite some time now. His grandfather is still a source of inspiration for him.
The native Italian is the grandson of the world-famous singer Mario Lanza. But he has long since ventured out of his grandfather's slipstream. Cristian Lanza's lyrical tenor is softer and more fully timbred than his grandfather's. Not only does he have the height that is expected of tenor arias, but he always enchants and touches his listeners with his soulful voice.
With his vocal power Cristian Lanza could already convince and inspire a large audience. As an Italian tenor he has succeeded in singing his way into the hearts of connoisseurs and friends of classical music as well as into those of his critics. And not only in the great halls and philharmonic halls from Munich to Berlin, but also in small venues, such as the 1st Roncole Verdi Festival directly in front of Verdi's birthplace in Roncole Verdi near Busseto, together with the Roncole Verdi Orchestra conducted by Silvano Frontalini in cooperation with the Milan Casa Verdi. The concert was broadcast live on Italian TV and worldwide.
The repertoire of the tenor extends far beyond Puccini, Verdi, Leoncavallo, Donizetti, Flotow, Giordano, Mozart, Bizet, C. Cilea and especially Neapolitan vocal pieces. Cristian Lanza touches and enchants people with his voice and his music, among others he appeared as "Ismael" in the opera Nabucco.