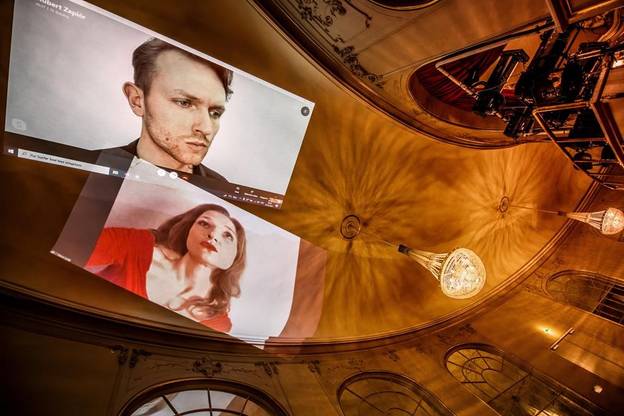 Mozart's "Così fan tutte" covers the whole emotional range of human relationships—and returns to the Komische Oper Berlin in a production by Kirill Serebrennikov! Two couples, an obscure call to the army and a dubious string-puller are the ingredients of this cheerful drama. Ferrando and Guglielmo, both in love and freshly engaged, separate from their partners Fiordiligi and Dorabella to go to war. Because they (apparently) die in battle, the women are left behind with their grief, and find their way back to life in very different ways. Or was it all a ploy by the men in the end?

Kirill Serebrennikov’s production dissects the states of mind of the two women—how they deal with grief and physical desire—making Mozart's masterpiece more sensual to experience than ever. The feminine “tutte” in the title, translating as, “this is how all women do it,” becomes a motif that combines the complexities of attraction, grief, fidelity and sex of a modern relationship with Mozart's music. The work does not condemn any of the characters, allowing viewers a deep look into the hearts of four lovers.

The production by Russian director Serebrennikov was created in 2018 at the Zurich Opera House, staged via video transmissions (due to his house arrest in Moscow at the time) and with the help of his long-time collaborators. For the Komische Oper Berlin, Cos ì fan tutte marks the beginning of a Da Ponte trilogy—the three operas Mozart wrote with his outstanding librettist Lorenzo Da Ponte: Cos ì fan tutte, The Marriage of Figaro and Don Giovanni.

By the way After American Lulu and The Barber of Seville , Cos ì fan tutte is director Kirill Serebrennikov’s third work at the Komische Oper Berlin.

After Korngold's Das Wunder der Heliane, Christof Loy took on another rarity of the early 20th century for Deutsche Oper Berlin with Francesca da Rimini, which had its live stream premiere in spring 2021. more

Jupiter, the father of the gods, falls in love with Semele, the beautiful daughter of the king, just as she falls in love with him. Semele desires nothing more than to experience him in his true form: Only when he shows himself to her in all his divinity... more

William Shakespeare’s tragedy Hamlet, a late 19th-century French opera that is as poetic as it is grandiose, takes an intimate look into the inner turmoil of its main characters, Hamlet and Ophélie. Just two weeks after the king dies, the widow Gertrude... more

The fun-loving Manon is driven by a pronounced passion for luxury, which ultimately costs her her life. more

The magnificent magic of Baroque theatre on the stage of the Komische Oper Berlin: In the acclaimed production by Norwegian theatre magician Stefan Herheim, under the musical direction of Baroque specialist Konrad Junghänel, Handel's opera Xerxes becomes... more