Ku'damm becomes a musical! It's about departure, first love and self-determination: Ku'damm 56 - The Musical will finally celebrate its world premiere on 28 November 2021 at Berlin's Theater des Westens. 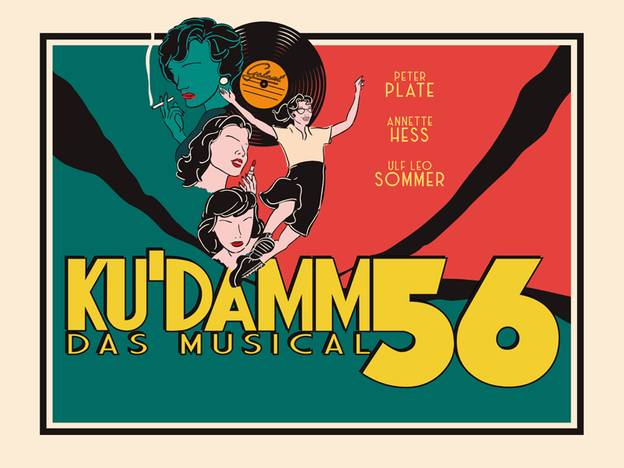 When "Ku'damm 56" is broadcast on ZDF in 2016, a surprise happens:
The fates of dance school owner Catherina Schöllack and her three daughters move not only those who lived through the 1950s, not only their children, but also their grandchildren*. The stories of Ku'damm fascinate across generations, the ZDF event, produced by UFA Fiction, is enthusiastically received by an audience of millions, in families 14-year-olds discuss the past with 80-year-olds, fan clubs form, and in streaming "Ku'damm 56" is still one of the most successful German productions today.
Between the economic miracle and rebellion, oppression and emancipation, in the lustful struggle for free, first and late love - now the stories of the Schöllack women take on a whole new dimension: multiple Grimme Award winner and author of the story, Annette Hess, sat down with Peter Plate and Ulf Leo Sommer (the songwriting team for Rosenstolz, Max Raabe, Sarah Connor) and together they created the stage version of "Ku'damm 56 - the Musical."
For a year, in a wonderfully fruitful exchange, not only the scenes, the dialogues, the music were formed, but also the common feeling that these universal stories about women looking for their place in life need to be told especially today.
The film is directed by Christoph Drewitz ("Die fabelhafte Welt der Amelie" / "Fack ju Göhte") and Adam Murray (Elton John biopic "Rocketman") is responsible for the spectacular choreography.

The christmas bakery - The musical for the whole family

The musical for the whole family: The Christmas bakery 2020 with the songs of Rolf Zuckowski. more

all you need is love! - The Beatles-Musical

It's time again for the biggest party and the naughtiest fun in musical history: With shameless speed, outrageous glamour and lots of sex appeal Richard O'Brien's Rocky Horror Show returns to Germany, Austria and Switzerland. more