Hyäne Fischer – Das totale Musical is a heroic epos recounting the myth surrounding the pop star Hyäne Fischer and Germany’s last chance to collectively embark upon the path that will lead into the golden era of matriarchy. 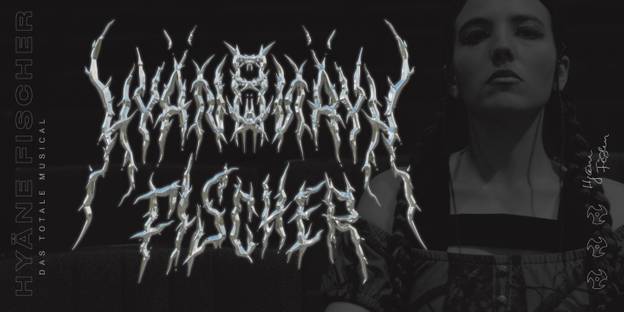 The total musical showcases the true heroes and heroines in the one and only cultural history – the living and the dead. With a smile, these heroes are fearlessly scalping neo-fascists, singing the song of finding your way out of social grievances and despair, thereby creating the first classic “of the new era” in the 22nd century.
The libretto puts an end to the state of misery most discursive and narrative forms are in, by replacing them with pure poetry and pathos, thanks to Lydia Haider, who is at the height of her aesthetic powers. The lyrics push their way into the foreground in luxuriating operatic compositions by Eva Jantschitsch, extending Volksbühne’s musical line between electronic and New Music to embrace big orchestral moments and witty hyperbole. Musical co-producer is Ville Haimala, with a six-member live band consisting of Berlin-based musicians Borninflamez and Minimal Violence (Ash Luk), hornists Mathilde Conley, Sonja Engelhard and Maxine Troglauer, and Sara Neidorf on drums, accompanied by a nine-member choir including Derya Atakan, Zuzana Cuker, Josephinex, Giselle Mapp, MissVergnügen, Kinga Ötvös, Yasmin Saleh, Danja Schilling, Carina Schwertner, Christine Seraphin and Linnéa Tullius. The artist Marianne Vlaschits has designed a symmetrical cosmos for the throwaway of our times, and the fashion designer Dalia Hassan created costumes deconstructing codes and ciphers of revolution, mythology and popular culture beyond existing standards. The production’s artistic director is Marlene Engel, pushing the musical genre to its limits to create a new format for contemporary music and open up avenues to a golden age.

“I am what I am, and what I am is no secret”—And it shouldn’t be! In 1983, the beat of freedom resounded from Broadway to London, Paris, Vienna and Berlin. more

The Bee Gees are legendary. The hits of the three brothers Robin, Maurice and Barry Gibb broke all records. The tribute show with two of the original musicians is a homage to the life's work of the Bee Gees. more