A Musical by Rory Six 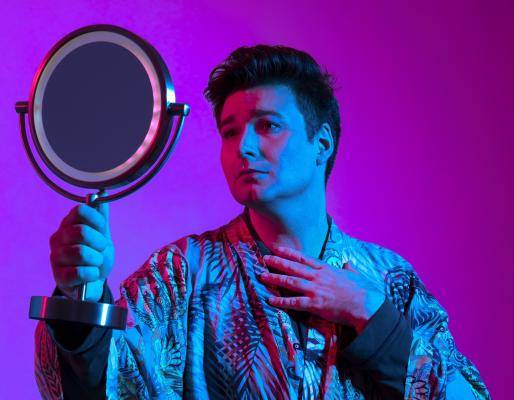 EIN WENIG FARBE - that's what Klaus wishes in his life: as a man who is a woman and also wants to live as a woman. And so Helena takes us along on the path of her secret self-discovery, tells of the personal and family ups and downs and the social hurdles to be overcome as a transgender personality.

On the day before the last operation necessary for gender reassignment, Helena reflects once again on how it all came about. Helena used to be called Klaus. Even as a little boy, he felt like dressing up in his mother's clothes and putting on makeup. Klaus is married and has two sons. For a costume party he dresses up as a woman and from then on takes a liking to it. He seeks out clubs where he can be whatever he wants once a week. Klaus doesn't just want to feel like a woman, he wants to be one.

We experience how Helena feels herself, how society, family and the closest circle of friends react to her. The play questions in a humorous and equally clever and compassionate way what is actually "normal" in our society. The wife, who at first distances herself completely from Helena, the children, who don't know whether they should continue to call Dad Dad or Mom - they all find their place with Helena again.

EIN WENIG FARBE is a musical that could not have been written in a more intimate and touching way - with author and musical star Rory Six, who can be seen in 13 different roles.

Born in Belgium, he studied at the Fontys Conservatorium in Tilburg. In Belgium and Holland he appeared on stage as Paris and Friar Lorenzo in ROMEO AND JULIA, in LES MISÉRABLES he was in the ensemble as Cover Marius in Berlin and in St. Gallen. In Stuttgart he embodied Archduke Rudolf in ELISABETH, at the Musical Festival Graz Jack Seward in DRACULA, at the Bad Hersfeld Festival John Utterson in JEKYLL & HYDE. Since 2008 Rory Six lives in Vienna and has been on stage at the Raimund Theater as Cover Crown Prince Rudolf in RUDOLF - AFFAIRE MAYERLING, as Cover Death in ELISABETH and in MESSIAH ROCKS, as well as at the Musical Sommer Amstetten as Malcolm MacGregor in THE FULL MONTY. He is the director of Vienna's off-stage Theatercouch, where he portrayed Adam in THE DIARY OF ADAM AND EVA, Conchita Tofu in MORD AUF SENDUNG, Rudy in WEIHNACHTSENGEL KÜSST MAN NICHT and David in SARG NIEMALS NIE. From September 2019 to June 2021, he was on stage as Alt Deuteronimus in CATS at the Ronacher in Vienna.

Even before his training as a musical performer at the Fontys Academy of Music in Tilburg, Rory Six composed the musicals ARAQUIRI, WAS and BRUDER for the Theater De Illusie in his native city of Oostende/Belgium.

However, after devoting himself to stage work for several years, the passion to develop new pieces reawakened in him. In collaboration with Kai Hüsgen, he wrote the book and composed the music for the musical WHEN ROSE BLOWERS FALL, which won awards at the MusicalMakersBeurs 2010 in Amsterdam and at the Flemish Musical Awards 2011.

He created the music for the production of ROMEO AND JULIA at the 2009 Weissensee/Thuringia Festival and for the folk music parody MORD IM MUSIKANTENSCHUPPEN. He wrote the musicals WENN ROSENBLÄTTER FALLEN, LUNA, EIN WENIG FARBE, DIE MÄDCHEN VON OOSTENDE, FINDER and WEIHNACHTSENGEL KÜSST MAN NICHT.

The Broadway highlight Cabaret by director and Madonna choreographer Vincent Paterson will finally be back on stage in Berlin in the summer of 2022! The film version of the work with Liza Minnelli as Sally Bowles 50 years ago has received eight Oscars. more