The multiple Grammy and Juno Award-winning queen of jazz pop will be in Germany for two exclusive concerts in 2023. 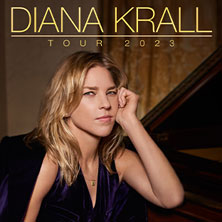 The New York Times once described the Diana Krall phenomenon with the following words: "A voice that is at once cool and sultry and led with a rhythmic sophistication". Perhaps it is precisely this ambivalence that makes her style so distinctive. And she has done so with tremendous worldwide success. In fact, Diana Krall is the only jazz singer to have eight albums reach the top of the Billboard Jazz Albums chart, her impressive body of work has been awarded multiple internationally renowned music prizes and endelmetals.
Born in 1964 in Nanaimo/British Columbia, Diana Krall first studied at Berklee College of Music in Boston in the early 1980s and then moved on from there to Los Angeles to take private lessons with Alan Broadbent and Jimmy Rowles and gain experience in the local jazz clubs. Further stops on her way up the ladder were then Toronto and New York before she finally stepped into the limelight in 1993 with her aptly titled debut album "Steppin' Out". When she first worked with legendary producer Tommy LiPuma on the recording of her second album "Only Trust Your Heart" in 1994, she felt like she was in seventh heaven. She quickly realised that she could by no means trust only her own heart, but also Tommy LiPuma. The exceptionally close collaboration between Krall and LiPuma was to produce nine more successful albums in the following fifteen years - including the million-sellers and Grammy winners "When I Look In Your Eyes" (1999), "The Look Of Love" (2001), "Live In Paris" (2002) and "Quiet Nights" (2009) - as well as a "Very Best Of" compilation (2007).
Krall celebrated great success with the bossa nova gem "Quiet Nights" (2009), which was also to be the last studio album produced by Tommy LiPuma. In 2012, under the auspices of roots rocker T Bone Burnett, she took a nostalgic but wickedly sexy-sounding trip back in time to the early days of jazz on "Glad Rag Doll", while in 2015 she showed her poppiest side on the David Foster-produced album "Wallflower" with songs by Elton John, 10cc, Crowded House, Bob Dylan and Paul McCartney, among others. Then came the reunion with Tommy LiPuma on "Turn Up The Quiet", before Diana Krall recorded "Love Is Here To Stay" in 2018 as a duet with crooner Tony Bennett, an album exclusively with classics by the Gershwin brothers.
Diana Krall's recordings have been featured on several film soundtracks, and she has also expanded her role as a singer and pianist to include writing, producing and arranging songs, as well as lending her talents to collaborations with artists such as Paul McCartney, Barbra Streisand and Tony Bennett.
She tours extensively around the globe to sold-out crowds - in 2023, she can finally be seen live again in Germany with two exclusive concert evenings.

Four times BRIT nominated, RAYE is one of the most streamed artists in the world with over 2.3 billion streams of her music. She has a double-platinum, four platinum, two gold and three silver singles to her name. She is also indisputably one of the UK's... more