I Wanna Thank Me Tour

Experience the D-O-double-G together with guests like Warren G, Versatile and many more live in the Max-Schmeling-Halle 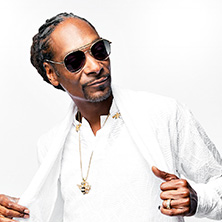 His debut album "Doggystyle" sold over four million copies in the USA alone. As one of the most successful American rappers, Snoop Dogg shaped the G-Funk of the 1990s and remains a leading figure in the genre today. Rap superstar, singer, producer, songwriter, label boss, actor, comedian, computer game junkie, football coach, dad and pimp: the multi-talented Snoop Dogg simply gets everything under one hat.
In addition to his hard-hitting lyrics, fat beats and his constant presence on music channels and YouTube, Snoop has long since become a highly successful brand. Ostracised by critics for his lyrics glorifying drugs and violence, Snoop Dogg scores all the more points with his fans.
His linguistic and technical skills in songs like "Drop It Like It's Hot" or "That's That Shit" are undisputed and have earned him numerous awards.

The LA-based producer, musician and designer Duckwrth, aka Jared Lee, has quickly established himself as a promising star in the music scene. more