$NOT doesn't wake up every morning trying to go viral - it just keeps happening. Since he started uploading songs to SoundCloud in 2016, the Florida rapper's music has exploded across the internet in every way imaginable. 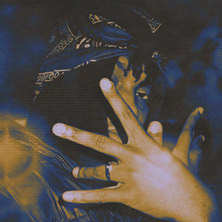 Tracks like "Case 19" caught fire on YouTube and SoundCloud before releases like "Gosha," "Excuse Me" and "Mean" went viral on TikTok. $NOT has become a superstar in no time, making music that will find its way to the ears of millions no matter where it's shared on the internet. This is also how he built an extremely loyal fanbase.
When Trippie Redd posted a video on Instagram asking for feature suggestions, the comment columns filled with $NOT fans, which actually then resulted in a joint song. His fans also include music greats like Billie Eilish and the production of the popular HBO series "Euphoria," who have featured his music on the show.
That he is not a TikTok one-hit wonder, $NOT proved pretty quickly. That's probably because of his effortless style. $NOT never tries too hard - not in the studio, not on social media, not anywhere. Instead of trying to do too much, he focuses on perfecting subtly catchy melodies and writing believable verses. Songs like "Revenge" may not immediately blow you away with excessive energy or flashy accents, but you won't be able to get rid of the earworm for weeks. He describes his sound himself as "chill, dark, vibey, wavey, but all together. I stand out because I do what the fuck I want."
What's crazy is that $NOT is only at the beginning of his career and everyone is eagerly watching how steep it can still go for the young rapper. In 2022 $NOT will come to Germany for four dates!

Experience the D-O-double-G together with guests like Warren G, Versatile and many more live in the Max-Schmeling-Halle more