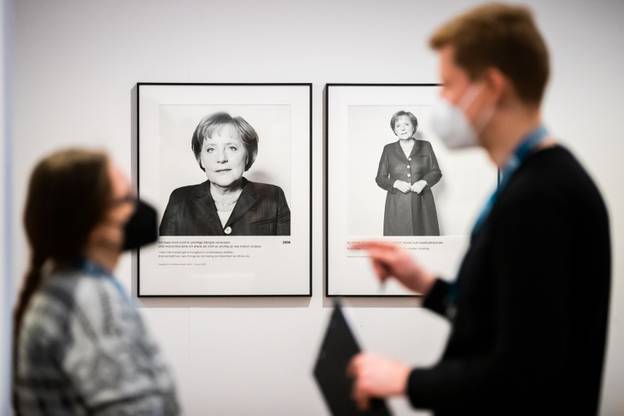 When Angela Merkel’s tenure as federal chancellor ended in autumn 2021, a worldwide unique project of the photographer Herlinde Koelbl also came to an end: With a brief hiatus, Herlinde Koelbl has accompanied Angela Merkel over a period of 30 years, from 1991, when she entered the political arena, until today. The periodic portrait sessions document her rise from a young, inexperienced politician to chancellor of the Federal Republic and finally to the rank of a global leader. The photographs combine to form a time journey through the era Angela Merkel. No similarly comprehensive portrait series exists for a comparable international ascent of any other politician. The close-ups capture an extreme physical and psychic transformation and form at the same time the protocol of an unusual encounter. For the visitors of the Deutsches Historisches Museum, the series offers the opportunity to trace the stations of Merkel’s chancellorship.
In the year 1999, the DHM had shown the exhibition “Traces of Power”, for which Herlinde Koelbl repeatedly portrayed fifteen leaders from the areas of politics, industry and the media over a period of eight years, including Angela Merkel. Koelbl continued the cooperation with Merkel, thus forming a direct connection between the earlier and the current exhibition project.