Audiowalks: Berlin's Architecture in the 1980s

The Berlinische Galerie has developed a web-based digital application that makes it possible to experience the exhibition in urban space. The Audiowalk app tells the stories behind the buildings at their original locations. 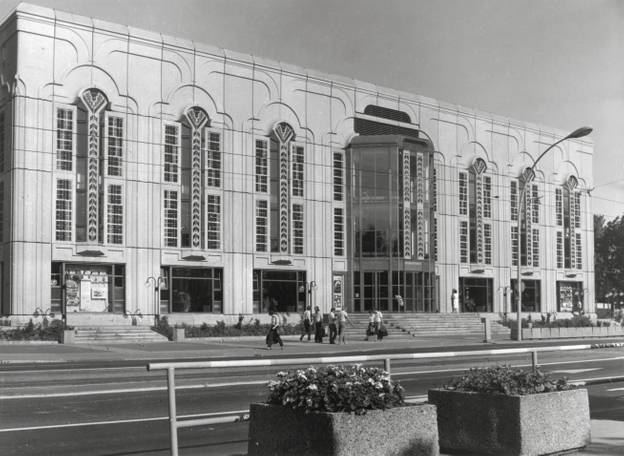 Berlin boasts a unique concentration of noteworthy buildings from the 1980s, and more than 30 years later they deserve a review. The colourful diversity of this architectural vocabulary challenged previous ideas of living in the modern world.
Widely labelled “postmodern”, it drew on structural typologies and stylistic devices from the past and tested alternative urban lifestyles. In the run-up to the celebrations marking 750 years since the original town charter, the entries submitted to the “Internationale Bauausstellung” in West Berlin in 1984/87 and the “Bauausstellung” of 1987 in East Berlin turned the city into a kind of architectural laboratory observed from well beyond its boundaries. Even at the design stage, some were already attracting criticism as artistically misguided, and significant examples of this era in architecture have since disappeared, been revamped or else threatened by demolition. This exhibition is the first attempt to show who and what set their stamp on the buildings and visions developed for East and West Berlin in the final decade before the Wall fell.
Participating architects (selected):
Hinrich and Inken Baller; Christian Enzmann and Bernd Ettel; John Hejduk with Moritz Müller; Josef Paul Kleihues; Michael Kny and Thomas Weber; Hans Kollhoff; Dorothea Krause; Rob Krier; Peter Meyer; Frei Otto with Hermann Kendel, Martin Küenzlen, Günther Ludewig; Manfred Prasser; Günter Stahn; Helmut Stingl; James Stirling and Michael Wilford; Peter Stürzebecher, Kjell Nylund and Christof Puttfarken; Oswald Mathias Ungers; Solweig Steller-Wendland.
The exhibition has been funded by the Kulturstiftung des Bundes (German Federal Cultural Foundation).
Free audiowalks on Berlin architecture from the 1980s
Many of the exhibition's locations are in the immediate vicinity of the Berlinische Galerie. Therefore, in cooperation with the agency 3pc GmbH, the museum has developed a web-based digital application that makes it possible to experience the exhibition in urban space.
The Audiowalk app tells the stories behind the buildings at their original locations. Three routes lead to important buildings of the International Building Exhibition Berlin 1987 (IBA 87) in Kreuzberg and to postmodern buildings in West and East Berlin along Friedrichstraße. The audio contributions are available in German and English and can be played chapter by chapter. To facilitate navigation, the three, approximately 30-minute routes are marked on a digital map. Alternatively, the audiowalks can be listened to from home or any other location.
The audiowalks in English or German can be accessed free of charge via the website of the Berlinische Galerie: berlinischegalerie.de/digital/anything-goes