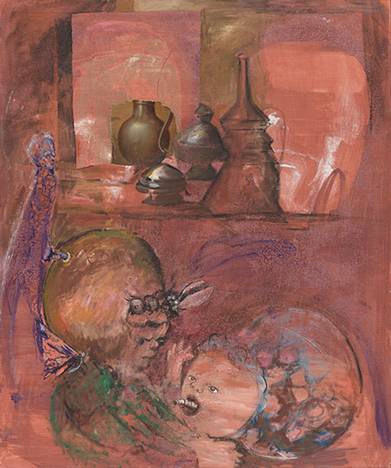 KW Institute for Contemporary Art is pleased to present Berlin-based artist Amelie von Wulffen (born in 1966, DE) who has long established herself internationally as one of Germany’s most important painters. The exhibition at KW marks von Wulffen’s first institutional solo show in Berlin and presents a comprehensive body of new commissions among a survey of selected existing works.
Since the 1990s, von Wulffen has created a sophisticated and unique oeuvre that enquires into the historic, economic, and social conditions of painting. Highly self-reflexive, von Wulffen’s practice expands to include the artist herself. She frequently appears in her own work in different guises, interweaving her family’s past with national history and existential questions about a specifically German cultural heritage. Von Wulffen’s works purposefully juxtapose aesthetic incongruities and combine different styles of painting from art history and amateur art to re-purpose their associative weight. In that respect, her work reads as a meta-reflection on the aesthetic incongruities of both post-war Germany as well as contemporary popular and political culture. This effect is compounded by the inclusion of references to decorative arts, furniture and architectural elements.
Similar to von Wulffen’s previous painting cycles, her new paintings also reflect upon the abysmal dimensions of the family as a site which embodies love and culture as much as it uncovers grim problems and repression. By carrying the idea of emancipation and liberation from one’s own parents, these works have a strong emotional quality. Newly produced small sculptures are arranged in a scenographic, painted genre installation—a dramatic cabinet of curiosities of sorts which circles around the relationship between humans and nature, one which, despite vast environmental destruction, is still dominated by romantic projections of landscape and nature. The installation is accompanied by a selection of existing paintings, drawings, furniture, sculptures, and films by the artist.
Curator: Anna GritzAssistant Curator: Kathrin BenteleThe exhibition by Amelie von Wulffen is supported by the Senate Department for Culture and Europe, Berlin.

Dalí - The exhibition at Potsdamer Platz

The museum "Dalí - The exhibition at Potsdamer Platz" is a cultural highlight with more than 450 original exhibits and offers the most comprehensive insight into Salvador Dalí's virtuoso and experimental work. more

In sharp contrast to naturalists’ and impressionists’ excitement for those facets of modernity that lie on the surface and in the ephemeral, a new artistic movement emerged in the 1880s, whose main characteristics were sensuality, fascination for magic,... more

This large-format altarpiece with its unusual depiction of the “living cross of Ferrara” – an allegory from the Old and New Testament – was given to the Gemäldegalerie by the Humboldt Universität Berlin as a permanent loan and restored with the support... more

Giovanni Battista Piranesi (1720–1778) was one of the great polymaths of the 18th century. He carved out an international career as an archaeologist, artist, collector, designer, publisher and author. The principle behind his success was to grasp the... more