Their dance is a challenge of the laws of gravity: the Georgian artists fly and whirl over the stage and perform traditional folk dances in an exciting and breathtaking manner. 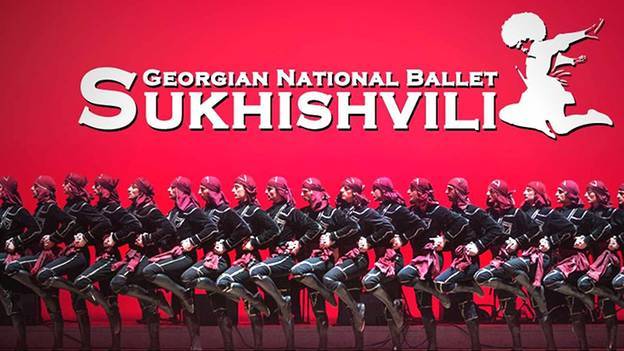 Immediately after its foundation, the dance group Sukhishvili started to give guest performances all over the world, which surprised the people of many nations of the world. Over 90 million people have seen their live shows - and they have enjoyed their success for more than a century.
Enthusiastic viewers around the world
The group has about 300 performances a year. Several million spectators attend their performances in sold-out houses in over a hundred countries worldwide. Despite the diversity of languages, the name of the Sukhishvili group, whose concerts never leave the audience without striking and fiery emotions, is read with pleasure.
A breathtaking costume collection
The costume collection of the Georgian National Ballet Sukhishvili includes a variety of traditional costumes for more than 150 dances, all costumes are made of an exclusive natural fabric and decorated with embroidery, painting, appliqués, glitter and stones. In the beginning the costumes were designed by the famous painter Soliko Wersaldze (1908-1989), currently the costume designer is the artistic director Nino Sukhishvili.
The ballet's ethno-orchestra shows traditional playing techniques and instruments
The orchestra of the ballet, in which exclusive musical instruments have been collected, deserves special mention. The musicians master a special playing technique that cannot be taught in any music school, it is passed on from generation to generation.
"The Georgian artists are perfect. This is not a dance, it's a flight. A storm on stage." New York Post (USA)

Experience Irish tap dancing in its most beautiful form and let yourself be carried away on a time travel through its 200-year history - timeless fascination, irrepressible power and an impressive dancing feeling along an emotional love story. more

Don't Stop The Music - The Evolution Of Dance

Talented dancers, breathtaking choreography and the greatest hits of all time come together in a unique show that will guide you through the evolution of dance. more