E-Ceilidh with the Berlin Ceilidh Band

In this modern form of a Scottish ceilidh, the audience dances together to live music from melodeons, fiddles, whistles and many other traditional instruments. 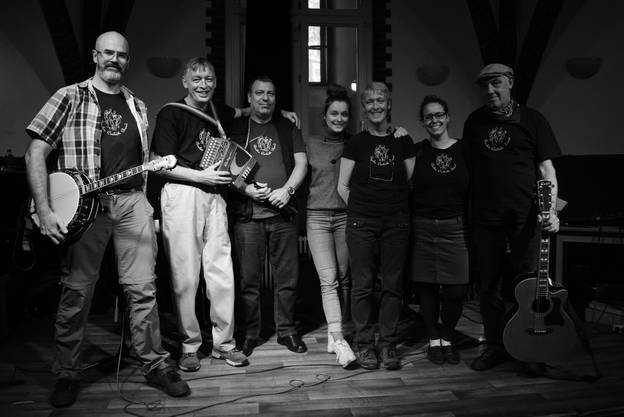 In modern E-Ceilidh, traditional dance sets are usually played and danced together with the audience. The music is a mix of traditional and modern pieces and instruments, such as melodeon, fiddle, electric bass and percussion. The beat of the music is lively, the dances are full of energy and easy to learn, even without any previous dancing experience.
Dancing according to Scottish tradition
A ceilidh was traditionally a social gathering with roots in Scotland and Ireland and did not necessarily involve dancing. Rather, people met to tell stories, recite poetry and sing. Over time, however, music and dance became more and more important and now dominate the main programme of the gatherings. Jigs, reels, polkas, line, square and circle dances are danced to live music from melodeons, fiddles, whistles and many other traditional instruments.
Berlin Ceilidh Band
In December 2009, a few musicians and a dance instructor came together in Berlin to organize an E-Ceilidh evening the following January. What began as a unique experiment was such a resounding success that we decided to repeat it in any case. So we continued with regular E-Ceilidh evenings, indoors in winter, outdoors in the park in summer, which are still very popular. We are now a group of about 8 musicians from England, USA, and Germany, which is constantly enriched by national and international guests.

A celebration of dance with the atmosphere of a concert, an expressive expedition into all facets of existence, a choreographic ode to the sound and the atmosphere of the 1980s – “LOVETRAIN2020” is all of this, a contemporary “musical” for 14 dancers... more