Directly from the USA, the American country music spectacle Nashville Live is performing in Germany for the first time. The audience is taken on a journey through the history books of country music. 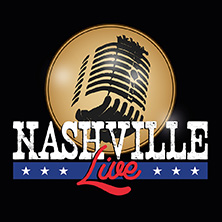 Hits by Dolly Parton, Johnny Cash, the Dixie Chicks and more
With music from classic artists like Johnny Cash, Willie Nelson and Dolly Parton and newer artists like Garth Brooks and the Dixie Chicks. Nashville Live ust a firework of the greatest legends of country music and the fascinating stories behind their songs. Listen to world hits like "Folsom Prison Blues", "Crazy", "Jolene", "The Gambler" and many, many more.
The evening is designed in the style of a Grand Ole Opry live radio show - with the Opry announcer, live commercials and performers revealing the hidden stories of country music. The band of stage musicians is led by Luke Thomas, the "Musician of the Year" (2017) according to the British Country Music Association. This musical journey through the greatest moments of country music is an evening not to be missed!
Top performers from London's West End play country legends
The cast also includes four top west-end performers: Scottish-born Robbie Durham, who played as Johnny Cash on the Million Dollar Quartet's UK tour. He plays Johnny Cash, Hank Williams and Kenny Rogers. Chris Grahamson from Billy Elliot (West End) and Charlie and the Chocolate Factory (West End) plays the announcers Willie Nelson and Garth Brooks. Lisa Wright, Sunny Afternoon (West End), plays Dolly Parton and Tammy Wynette. Helena Gullen, the hit musical Once (West End), slips into the roles of Patsy Cline and Loretta Lynn. Nashville Live is produced by Maple Tree Entertainment Ltd., whose production The Simon & Garfunkel Story is currently set in London's Lyric Theatre in the West End and has been seen by over 100,000 people around the world.
Translated with www.DeepL.com/Translator (free version)

On the upper floor, the 'Museum of Prehistory and Early History' takes visitors on a tour through the oldest eras of human history. With its unique collections on the prehistory and ancient history of Europe and near-lying regions of Asia, the museum... more

Life in the Middle Ages

Right at the entrance to the Düppel Museum Village, a completely revised and redesigned exhibition makes life in the Middle Ages comprehensible. Participation stations invite visitors to smell, touch and try things out, and six fictitious inhabitants... more