Presented by Sound of Nashville

Brett Young has captured the hearts of fans everywhere with his honest lyrics and West Coast-meets-Southern sound, cementing his status with seven consecutive No. 1 hits and multi-platinum sales. 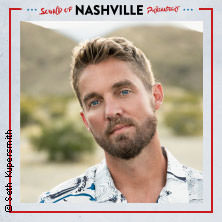 The master in matters of the heart already showed at the Country to Country (C2C) Festival 2020, why he carries this title. In November 2022, Brett Young will sweeten the weekend for his German fans when he comes to Cologne for two exclusive shows on Nov. 19, 2022, and Berlin on Nov. 20, 2022, on his "The Weekends" tour.
After his 2016 breakthrough with his single "Sleep Without You," his career took off. His 2017 self-titled album "Brett Young," which dominated the Top 20 Country Albums chart for 37 weeks , was certified platinum and contributed to the 5.5 billion streams worldwide, was followed by his gold-selling album "Ticket To L.A.," which debuted at the top of the Billboard Country Albums chart. YOUNG perfected his new-country blend of sunshine soul and lighthearted pop and was named the 2018 ASCAP Country "Songwriter-Artist of the Year" for his "melodic craftsmanship" (Billboard). He has also been nominated for ACM, Billboard, Teen Choice, CMT and CMA Awards, while continuing to score hits non-stop as "one of the most consistent radio stars on the country scene" (Rolling Stone).
With his latest album, "Weekends Look A Little Different These Days," the star expands his emotional range. This album, which is also available in an acoustic version, talks about life, love as well as family and includes his single "Not Yet" as well as the platinum-certified No. 1 song "Lady," whose lyrics inspired YOUNG to write his first children's book "Love You, Little Lady." Already at the 2020 C2C Festival, the modern-country crooner with the natural Southern charm and smooth yet raspy voice knew how to win over his audience. Brett Young will also make our hearts beat faster in November 2022 and provide a great concert evening!

Dan Mangan is an award-winning singer-songwriter from Vancouver. He won the JUNO Award twice - in a way the Canadian version of the Grammy. more

Directly from the USA, the American country music spectacle Nashville Live is performing in Germany for the first time. The audience is taken on a journey through the history books of country music. more