The Lord of the Rings & The Hobbit - Live in Concert

with Billy Boyd and the Tolkien Ensemble

Experience J. R. R. Tolkien's masterpiece "The Lord of the Rings" as a live concert with orchestra, choir and the Tolkien Ensemble as well as a contribution by "Saruman" actor and Hollywood legend Sir Christopher Lee and an unpublished song for Peter Jackson. 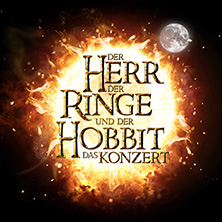 The Lord of the Rings & The Hobbit - the Shire concert with "Pippin" Billy Boyd
J. R. R. Tolkien's masterpiece as a live concert with orchestra, choir and the Tolkien ensemble as well as the world successes of Oscar winner Howard Shore, Annie Lennox, Enya and Ed Sheeran / with a contribution by "Saruman" actor and Hollywood legend Sir Christopher Lee as well as an unreleased song for Peter Jackson.
The legendary trilogy "The Lord of the Rings" as a musical
The fantastic world of Hobbits and Elves from J.R.R. Tolkien's "Lord of the Rings" goes on tour again as a concert with symphonic orchestra and choir. In a two-hour evening performance, the legendary double trilogy is brought to life in a unique musical event. From the threatening sounds of Mordor and the shrill attack of the black riders to the beautiful lyrical melodies of the elves - almost 100 performers will transform the concert hall into a musical setting of Middle-Earth.
The music for the film trilogy "The Lord of the Rings" and "The Little Hobbit" touched an audience of millions.
Howard Shore, who composed the music for the film trilogy "The Lord of the Rings" and "The Little Hobbit", was awarded an Oscar for it. As with Richard Wagner's "Ring des Nibelungen", his leitmotifs let the audience feel in the flesh when the ring unfolds its power and corrupts the bearer of all power: A parable that fits perfectly into today's age.
Pippin actor Billy Boyd sings live
Pippin actor Billy Boyd, who composed and sang "Edge of Nigh" in Lord of the Rings and "The Last Goodbye" in The Hobbit for Peter Jackson, is part of the film trilogy. He will present these works with an orchestra to a live audience. Billy Boyd was originally only hired as an actor by Peter Jackson, but one night he sang so impressively in a karaoke bar in New Zealand that the producers asked him if he could compose a song in two days? Two days later he presented three self-composed songs to Peter Jackson - one day later the scene was filmed with his song "Edge of Night" because Howard Shore was not ready with more songs yet.
The positive reviews speak for themselves
The press celebrates "The Lord of the Rings & the Hobbit - the Concert" as a "highly emotional and mythical experience" and praises: "Nearly 100 actors - from the well-playing orchestra to the vocal Auenland Choir to the outstanding soloists - showed their commitment to bring the audience into Tolkien's world-famous fantasy world. Whether bombastic with kettledrums and gongs or elven-like soft flute tones: the well-known, Oscar-winning melodies by Howard Shore from the film trilogy sounded again and again and immediately provided the right "cinema in the head". In the end, neither the audience nor the musicians held on to their chairs: the audience managed to get the actors on stage for three encores with standing ovations.

The Lord of the Rings & The Hobbit - Live in Concert
Admiralspalast

The Lord of the Rings & The Hobbit - Live in Concert
Admiralspalast

The Music of Star Wars - Live in Concert

To experience the moving music of multiple Oscar winner John Williams live - that is the greatest thing for fans of science fiction culture. The performances are causing storms of enthusiasm throughout Europe. more

Music from Harry Potter, Pirates of the Caribbean, Star Wars, The Dark Knight, E.T., Schindler's List, Gladiator, Jurassic Park and many others live with the German Film Orchestra Babelsberg and the Pilsen Philharmonic Orchestra & Choir more