New Year's Eve Party at Brandenburg Gate to be cancelled

New Year's Eve Party at Brandenburg Gate to be cancelled

According to Senator for Economic Affairs Ramona Pop, the New Year's Eve party at the Brandenburg Gate in Berlin is cancelled this year due to the Corona pandemic. "There will be no giant parties and family reunions. Otherwise we are threatened by the next wave of infection in February," said Pop (Greens) with a view to the turn of the year in the "Berliner Morgenpost" (Sunday, 22 November 2020). "There will be no party in Berlin at the Brandenburg Gate either".

Hundreds of thousands of people have regularly attended the traditional party at the Berlin landmark in recent years. In September, the organizers announced that due to the Corona Pandemic, significantly fewer people would be admitted and a registration procedure would be introduced. Outdoor events with more than 100 participants are currently prohibited in Berlin according to the Infection Protection Ordinance.

More about: Corona-related cancellations in Berlin

Now, according to information from the "Morgenpost", only one concert is planned at the Brandenburg Gate without an audience, but with television coverage. A statement of the organizers was not yet available on Sunday.

With a view to the debate on the future of Corona policy, Pop said: "I look with skepticism at suggestions: We're going to pull ourselves together again now, and then Christmas and New Year's Eve will be Halligalli," said the Green politician. "I would be careful to promise people that. 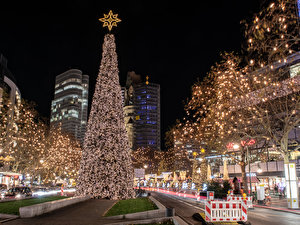 Almost exactly one month before Christmas Eve, Berlin's Kurfürstendamm will once again create a festive atmosphere in 2020. more