In Berlin 503 new corona infections were reported according to the report of the health administration of Wednesday (14 october 2020). On Tuesday, 706 new infections were reported, the highest daily figure since the beginning of the pandemic in spring. Berlin is thus on the verge of passing the 20,000 infection mark: The total number of cases now stands at 19,536, of which 15,126 are considered to have recovered. 236 people died in connection with an infection.

In the past week in Berlin 64 991 tests were accomplished, communicated the health administration on inquiry of the German press agency. "The positive rate amounts to currently 4.1 per cent." Nationwide the proportion of positive tests was, according to data from the Robert Koch Institute, less than two percent in calendar weeks 38 to 40, previously for a long time less than one percent. The value for last week was not yet published by the RKI.

Laboratories operating at over 100 percent capacity

The number of tests in Berlin in the previous week exceeded the weekly test capacity of 61,424 according to the health administration. The utilization of the laboratories was 105.8 percent as of Wednesday, it was said. The consequences of this and whether the capacity can be further expanded were not disclosed at first. 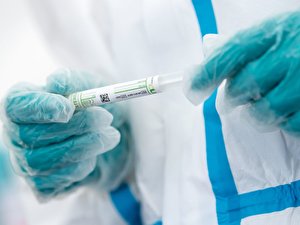 Passengers will no longer be able to have corona tests performed at Tegel Airport from this thursday onwards. more