Further corona measures will be eased

Further corona measures will be eased

The relaxation of measures to contain the corona pandemic continues. As of today, many things are once again possible that Berliners had to do without for a long time. Club members train in a gym.

After the participant limit for demonstrations in the capital was already abolished on Saturday, a number of further steps are now being taken, as the Senate has announced. This applies, for example, to pubs and bars that are allowed to open again, but only those where guests are seated at tables and only until 11 pm.
Also amusement arcades, casinos and betting shops can start again from Tuesday, just like fitness studios and dance schools. For sporting events, but also trade fairs or cultural events, the Senate initially allows up to 200 participants outdoors, and a maximum of 150 indoors.
In addition, from Tuesday, recreational athletes will be allowed to return to the indoor arenas. Basically, training is now possible again in groups of up to twelve people, both outdoors and indoors. In the past weeks, this was only possible outdoors and only in groups of up to eight people.
Tuesday is also an important day for film fans, even if the goal has not yet been fully achieved: For the time being, film screenings in the open air are permitted again. Cinemas will then be allowed to open again from 30 June.
There is an important change in religious events, for example in churches, mosques or synagogues: From now on, up to 200 participants are allowed, previously it was 50. Since Saturday, there is no longer an upper limit for outdoor services. 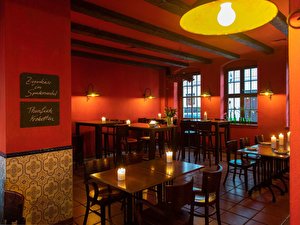 Berlin pubs and bars are allowed to open again in June

The pubs and bars in Berlin can reopen with restrictions. more