In Berlin, the number of confirmed corona infections has risen to 6737. From Wednesday to Thursday noon, 35 new cases were added, according to statistics from the Senate Health Administration. A 3D representation of a coronavirus.

47 people in whom sars-CoV-2 has been detected receive intensive medical treatment, a total of 146 are in hospital. Since the previous day, another death has been recorded, 196 people in Berlin are reported to have died in connection with the coronavirus. 6208 people are considered to have recovered.
The three so-called traffic lights for the current assessment of the situation remain green, according to the Senate administration. According to the data, the number of new infections per week remains at 4.7 per 100,000 inhabitants, which is well below the critical threshold of 30 for Berlin. The percentage of intensive care beds used by Covid-19 patients fell from 4.4 percent to 3.7 percent, far below the number 25 percent at which the corresponding traffic light would jump to red. According to the concept, if three traffic lights are red, there is a need for action. For example, more containment measures could then be imposed again. 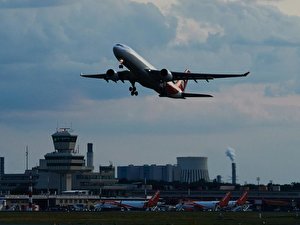 More aircraft will be taking off and landing in Berlin in the coming weeks as the airlines expand their flight offerings again after the Corona break. more