3.8 million people in Berlin now have to live with restrictions until after Easter because of the spread of the coronavirus - and on top of that they have to expect fines for violations even more than before. "Avoid unnecessary ways & contacts! #stay@home" is written on a sign at the street by the Urania. In order to slow down the spread of the coronavirus, the German government has considerably restricted public life.

As announced, the Senate extended the so-called contact ban, in force since 23 March, on Thursday until 19 April, as the German Press Agency learned. Initially, the decree was limited until this Sunday (5 March 2020).

In order to be able to sanction violations of the rules more effectively, the Senate also decided on a catalogue of fines. Although it was already possible to impose fines under the Infection Protection Act, for example, details have now been made more precise. It is now clearer which violation of the rules is sanctioned and how.

Fines or no fines - after two weeks of strict curfews, many Berliners will probably find it increasingly difficult to continue to follow the rules in what will soon be beautiful spring weather. Therefore the governing mayor Michael Müller (SPD) once again urged the people to do so. "We can see that the level of infection in our city is such that our healthcare system can still keep up," he said in a session of the House of Representatives. "But I must also make it clear that we are not out of the woods yet. We still have some hard weeks ahead of us." Therefore, the Senate cannot relax the ban on contact now.

Berliners must generally stay at home

According to the regulation, which came into force on 23rd March, all Berliners must stay "permanently in their flat or usual accommodation" in order to limit contacts and thus slow down the spread of the coronavirus. However, there are exceptions, such as visits to the doctor, shopping, walking the dog or sports and walks in the fresh air. A minimum distance of 1.5 metres must be maintained, and gatherings of more than two people outside are prohibited. For families, the group may be larger.

Short breaks allowed in the park

Now it is to be explicitly permitted to sit in a small circle - i.e. a maximum of two persons or families - on a bench or meadow for a short break. There must then be a minimum distance of five metres to other people. A central addition to the regulation is a ban on barbecues. The previous obligation for everyone to carry their identity card outside will be abolished. Also new: anyone returning to Berlin by plane from abroad will have to spend two weeks in domestic quarantine. 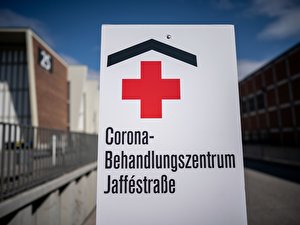 Berlin does not want to be caught cold: A hospital for coronavirus patients is being built on the exhibition grounds as a reserve. Many would be happy if the capital did not need it in the end. more