SPD politician Dennis Buchner is the new president of the Berlin House of Representatives.

At the constituent session of the state parliament on Thursday (November 04, 2021), the 44-year-old Buchner was elected by secret ballot with a broad majority. He succeeds Ralf Wieland (SPD), who is no longer a member of the House of Representatives in this legislative period.

Buchner, who had no opposing candidate, collected 120 of the 146 votes of the deputies present during the session. 25 voted no, with one abstention. In his new role as president of the House of Representatives, Buchner will be responsible for the functioning of the parliament for the next five years, including chairing its sessions. He also executes the laws that are passed and represents the House of Representatives to the outside world.

Buchner is originally from Lübeck and is a political scientist. He has been a member of the House of Representatives since 2011 and was the sports policy spokesman for the SPD parliamentary group during the last legislative period.

CDU politician Kurt Wansner opened the constituent session on Thursday. At 74, he is the oldest member of parliament in the new legislative period. As in the previous legislative period, six parliamentary groups are represented in the new 147-member House of Representatives. The strongest faction is the social democratic party SPD with 36 deputies, ahead of the Green Party with 32 deputies. The conservative party CDU has 30 deputies, the Left Party has 24. The right-wing AfD faction has 13 deputies, the liberal FDP has 12.

The election on September 26 was overshadowed by numerous organizational problems. Following announced or already received objections to the election results, Berlin's Constitutional Court has to decide whether the election needs to be repeated, either in part or even in its entirety. A decision is not expected until next year. Parliamentary business and the process of forming a government with the ongoing coalition negotiations between the SPD, the Green Party and the Left are therefore unaffected for the time being. 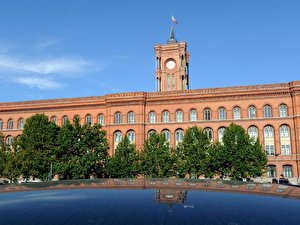 Information about Berlins administration and politics, the governing mayor, the senate and the senators, the local government and polity. more