Berlin owes the basis of its now world-famous Gemäldegalerie (Picture Gallery) to a wood and grain merchant. 200 years later, the exhibition "The Solly Collection 1821-2021. From Picture Chaos to Picture Gallery" looks back on the time from these humble beginnings until January 16, 2021. The English merchant Edward Solly (1776-1844) lived in Berlin for only a few years. During this time, however, he built up a considerable art collection of around 3000 paintings. Many were of rather inferior quality - for the curatorial team of the Gemäldegalerie these were so-called "couch pictures" that someone might put up in their living room. However, there were also some masterpieces among the collection, including works by Raphael, Giotto, Rembrandt, Jan van Eyck, and Hans Holbein the Younger.

However, the collection seemed quite chaotic to some of Solly's contemporaries. "Think of an accumulation of about eight to nine thousand pictures, of which four hundred are put up at most," Johann Wolfgang von Goethe's son August wrote to his father in May 1819, "quite confused" and with too high an estimate. The works were "piled up on and above each other in 30-40 rooms in kitchens, coach houses, and so on".

In November 1821, merchant Solly was short of cash and urgently needed fresh money. At the same time Berlin wanted to build a museum. The Gemäldegalerie was opened nine years later in 1830. The Prussian state bought Solly's collection for 500,000 thalers in gold - not a good deal for Solly, who had probably paid more than a million including transport and other costs, according to curator Robert Skwirblies' calculations.

Solly Collection forms the foundation of the Gemäldegalerie

With 700 works to date, the Solly Collection still forms the basis of the Gemäldegalerie, whose holdings include some 3000 works. The current exhibition focuses on two rooms of the museum. On display, for example, is Raphael's "Mary with Child," painted around 1502. A highlight of the collection of paintings is Rembrandt's "Jacob Wrestling with the Angel" from about 1659. 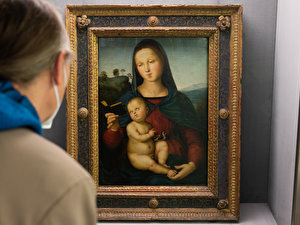