Ceremonial opening of the Humboldt Forum

Ceremonial opening of the Humboldt Forum

With the Humboldt Forum in Berlin, one of the most ambitious international cultural projects opened on 20 July 2021. Numerous guests attended the ceremonial opening of the Humboldt Forum.

The centre for culture, art and science, built at a cost of 680 million euros, will initially start with six exhibitions and a comprehensive opening programme. Admission is free for the first 100 days. The next opening step will follow in September, and in the first half of next year the entire Humboldt Forum in the centre of Berlin will be open.
Apart from the building itself with the historicising façades of the old city palace, large parts of the exhibitions are also controversial. From next year, for example, the Benin bronzes, which are considered looted colonial property, will be on display. "Coming to terms with Germany's colonial history will soon play a central role here," announced Minister of State for Culture Monika Grütters (CDU) during the opening ceremony. 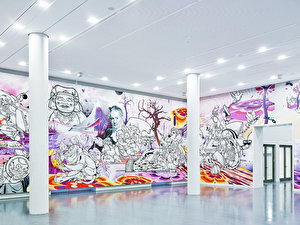 Interactive city stories at a historical location: The exhibition "Berlin Global" in the Berlin Humboldt Forum illustrates the mutual influences of Berlin and the world. more