The uncomfortable weather with snow, sleet and sleet showers will stay with the people in Berlin and Brandenburg for a while. According to the German Weather Service in Potsdam, temperatures will not rise to a spring-like 10 to 14 degrees until Friday (09 April 2021).
In the days before, a maximum of 8 degrees is reached. Arctic polar air flows from the North Atlantic to Berlin and Brandenburg. It can become slippery on the roads in freezing wet conditions, especially in the morning hours. But even during the day it can be dangerous with sleet showers, for example, with suddenly poor visibility and slippery roads.
On Tuesday, clouds will alternate with sunshine. Wednesday will begin clear, later clouds will bring sleet or rain. Thursday will be mostly rainless. 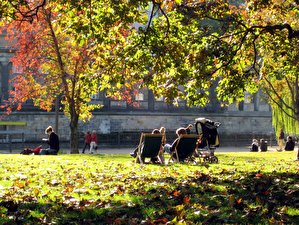