Opening of the Neue Nationalgalerie on August 21

Opening of the Neue Nationalgalerie on August 21

After five years of renovation, the Neue Nationalgalerie is scheduled to reopen on August 21. The Neue Nationalgalerie has been closed for renovation work for almost five years.

This was announced by the director Joachim Jäger on Friday (March 19, 2021) in Berlin. The huge flat building made of steel and gigantic glass fronts is considered an icon and landmark of modern architecture. Architect Ludwig Mies van der Rohe (1886-1969) created the building in the late 1960s as a museum for 20th century art.
At the Hamburger Bahnhof, the location for contemporary art of the Nationalgalerie, the director Gabriele Knapstein has not yet given up the fight for the Rieckhallen. For several years, the site and building have belonged to the private investor CA Immo, which wants to demolish the halls. As a result, the Nationalgalerie has already lost the "Flick Collection." Without the Rieckhallen, Knapstein sees the development possibilities of Hamburg's train station at risk.
Knapstein and Jäger, as well as the director of the Alte Nationalgalerie, Ralph Gleis, announced their intention to apply for the new director posts in the three areas of the 19th, 20th and 21st centuries. The new structure eliminates the higher-level director's post, which Udo Kittelmann held until his departure at the end of October. 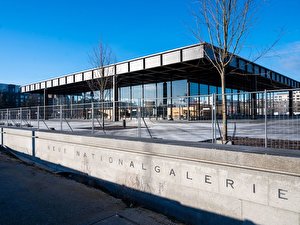 The Neue Nationalgalerie’s imposing steel and glass box near Potsdamer Platz is a mecca for lovers of contemporary art and architecture. more