Weather over the weekend: Mixed with occasional snow showers

Weather over the weekend: Mixed with occasional snow showers

The weather forecast for the weekend (19 to 21 March 2021) in Berlin and Brandenburg is changeable. After initially being densely cloudy in many places on Friday morning, the sky will clear up towards the afternoon, especially in the northwest, and the sun will shine from behind the clouds, the German Weather Service (DWD) reported. From the northeast to the southwest, however, individual snow showers will move over Berlin and Brandenburg. Temperatures during the day will range between two and five degrees. On Saturday night, temperatures will drop to minus eight degrees.

Saturday starts sunny in many places

The weekend will begin on a friendly note in many places, with only the southeast seeing dense clouds hanging in the sky over Berlin and Brandenburg. During the course of the day, according to meteorologists, dense clouds will also move in from the northwest in the remaining parts of Berlin and Brandenburg, but it will remain dry. In Niederlausitz, sunshine can even be expected in the afternoon and evening, the DWD said. Temperatures will remain at up to five degrees.

Sunday: Many clouds and drizzle

On Sunday, mostly many clouds are in the sky over Berlin and Brandenburg, there may be rain or drizzle, in the south snow or freezing drizzle. Towards afternoon, the skies will clear, especially in Prignitz and Havelland. Temperatures will range from six to nine degrees, in Niederlausitz around five degrees. 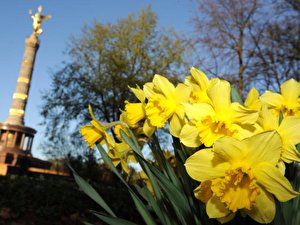 Weather in Berlin in March