The Italian actor Bud Spencer, who died in 2016, is being honoured with a museum in Berlin. Leonie adjusts the shirt on a life-size latex figure of actor Bud Spencer in the Bud Spencer Museum.

From Sunday, fans can discover the actor's life and work at the Römischer Hof on Unter den Linden. The show was already planned for summer 2020, but was then postponed due to the Corona pandemic. Just in time for the fifth anniversary of Spencer's death on 27 June 2021, original props and previously unpublished photos, among other things, will now be presented in the Bud Spencer Museum. Tickets for the opening day are already sold out. The exhibition, which was already on display in a similar form in Naples in 2019, was reportedly conceived by Spencer's family and will run for at least around two years.
Bud Spencer's real name was Carlo Pedersoli. He became famous for his portrayal of the good-hearted ruffian who keeps law and order in films such as "Trinity Is Still My Name". He died at the age of 86. 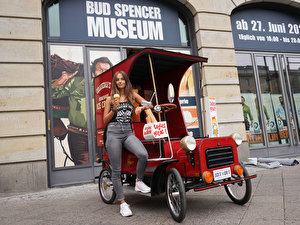