In the Corona year 2020, everything was different than usual on New Year's Eve in Berlin.

Those who value their health were well advised to avoid some streets in Berlin on New Year's Eve in past years: Even in the early hours of the day, rockets and firecrackers hissed and banged uncontrollably from all sides. Frightened passers-by zigzagged their way through the alleys and growled something about war-like conditions. The later the evening, the worse it got. In the days before, no one really believed that things would be different this year.

But the efforts to keep the Berlin New Year's Eve in the pandemic year 2020 as quiet as possible seem to have worked. In Neukölln, Kreuzberg, Wedding and many other neighborhoods, many firecrackers and rockets banged in the evening hours and at midnight it was almost as loud on the streets in many places as in ordinary years. Also the accident hospital tweeted around 20 o'clock from the first patient with "#Böllerschmerz". Further reports of injuries followed.

But the police's assessment did not change after midnight: "The situation cannot be compared to previous years," said police spokeswoman Patricia Brämer. "We would like to thank the many Berliners who complied with the ordinances."

Due to the Corona crisis, there had been several of these this year: The Berlin Senate had designated more than 50 restricted zones in which it was not permitted to stay or fire firecrackers on New Year's Eve. Alcohol sales were banned in supermarkets and late-night stores from the early afternoon, and the sale of fireworks was also prohibited this year. The aim: to avoid crowds during the Corona crisis and, above all, to keep the load in the emergency rooms as low as possible.

Police with great worries in the run-up

Fears remained that in a city like Berlin, hardly anyone would abide by the measures. The regional head of the police union (GdP), Norbert Cioma, called the construct with dozens of firecracker ban zones the day before "madness" and warned of attacks on the emergency forces. In addition, the Berlin police chief Barbara Slowik was concerned about illegal demonstrations, for example by self-proclaimed "lateral thinkers" or left-wing extremists.

Also interventions in zones where firecrackers are banned

As usual, the police and fire departments had prepared for New Year's Eve with numerous additional forces. 2,900 police officers were deployed, and a police helicopter circled above the districts to provide a better overview of the situation. The fire department was on the move with around 850 forces from the professional fire department as well as more than 520 volunteers from the volunteer fire departments. Around three and a half hours after the start of operations at 7 p.m., the emergency services reported almost 135 rescue operations and around 30 fires. They also included serious injuries caused by firecrackers, which in at least one case had occurred in a firecracker ban zone, according to the fire department.

But the usual hotspots of previous years - such as Hermannplatz in Neukölln, Innsbrucker Platz in Schöneberg or Alexanderplatz, were empty to some extent. There was also no sign of any prohibited demonstrations.

Police had to disperse several groups of people

Nevertheless, the police had their work cut out for them. In many places, the officers had to break up small groups of people again and again. More than 80 people were temporarily detained by the police for violations of the Infection Protection Act, as a spokesman said. At least three officers were slightly injured in action, according to the report, but were able to continue on duty. "Ignition of pyro, firing from alarm firearms, consumption of alcohol - the personal details taken by our colleg. fill several charges," the police announced on Twitter already in the early evening.

Many celebrations in small circles

Most Berliners, however, celebrated the New Year quietly and in small circles. The measures met with understanding from many. Some, like 49-year-old Stefan, who was walking with a friend in Neukölln, even found it "quite excellent that there is less shooting". Two 25-year-old women could also "fully understand" the ban, but were also a bit pleased about the civil disobedience they saw on the street.

Show at the Brandenburg Gate without an audience

Hardly anyone strayed to the Brandenburg Gate, where in previous years the biggest New Year's Eve party in the country was traditionally celebrated. Now, hit star Jürgen Drews or the band Karat played there for the live broadcast of the ZDF New Year's Eve show - but without an audience on site. The station had canceled the traditional fireworks display.

The Berlin Fire Department had christened its nighttime operation "State of Emergency New Year's Eve". Berlin was certainly in a state of emergency on New Year's Eve in the pandemic year 2020. But mainly because this night had nothing to do with the usual chaos, the many tourists, the noise and the parties. 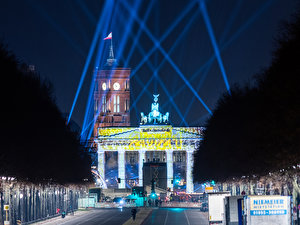 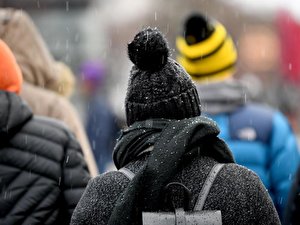 The new year 2021 is expected to start with snow in Berlin and Brandenburg. more