75 years after the end of the Second World War, the British heir to the throne Prince Charles invoked the partnership between Britain and Germany. The British heir to the throne Prince Charles gives a speech.

"Together we are an indispensable force for good in the world," said the Prince on Sunday (November 15, 2020) at the central commemoration of the National Day of Mourning (Volkstrauertag) in the Bundestag. Together, both countries resolutely defended values that were shared - as advocates of human rights and the rule-based international order worldwide.

Prince Charles gave his speech alternately in German and English - this too was to be seen as a gesture of solidarity with the former enemy of the war. He addressed crises and wars around the world, but also global health, vaccine development against the background of the corona pandemic, and the issues of clean growth, renewable energies, forest protection, biodiversity and climate protection - also in developing countries.

"These crises call on us to act together," Prince Charles warned. Against the background of the ongoing negotiations on brexite, the withdrawal of Great Britain from the European Union, he emphasized in German: "We are so deeply involved in the future of the respective other country that our national interests - even if they may be different - will always be intertwined. The heir to the throne added: "Our two countries are instinctive problem solvers, working together to find innovative and practical solutions to the challenges we face around the world. 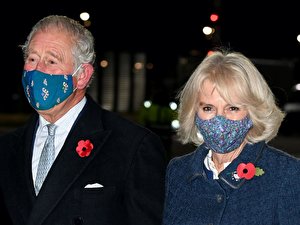 The British heir to the throne Prince Charles, Prince of Wales, and his wife, Camilla, Duchess of Cornwall, attended the central commemoration of the National Day of Mourning in Berlin on November 15, 2020. more