On the occasion of Helmut Newton's 100th birthday, the Helmut Newton Foundation is showing an outdoor exhibition in early November in honor of the photographer. On the 85-meter-long facade of the Kreftwerk in Kreuzberg at Köpenicker Strasse 70, around 30 pictures and some quotations from the photographer will be on display. In addition, there will be Newton images all over the city on City Light posters. The open-air exhibition begins on Helmut Newton's birthday on October 31, 2020 and can be visited until November 8.
Born in Berlin in 1920, the photographer had to flee the capital in 1938 from the National Socialist regime. Despite the tragic circumstances under which he had to leave Berlin, he regularly returned to his home town. He achieved fame through his picture series "Naked and Dressed" and "Big Nudes", among other things. 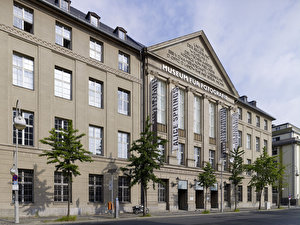 The Museum für Fotografie (Museum of Photography) and the Helmut Newton Foundation present all forms of photography from the 19th to the 21st century. more