A cyclist rides his bike on a pop-up cycle path in the rain.

It is planned for Lindenstraße in Kreuzberg, as the district office announced on Wednesday (October 7, 2020). In addition, the previously limited cycle paths with a total length of eleven kilometers are to be made permanent this year. The District Office welcomed the decision of the Berlin Higher Administrative Court on Tuesday that the previouspop-up cycle paths may remain for the time being.
In Friedrichshain-Kreuzberg, ten such cycle paths were set up in spring and summer. "We will continue to make our district bicycle-friendly and safe," announced District Mayor Monika Herrmann (Greens).
On Tuesday, the Higher Administrative Court (OVG) provisionally overturned a decision by the lower court, according to which the provisional cycle paths should have been removed. In September, the judges at the Administrative Court had raised doubts about the legality of these cycle paths. They could only be ordered where there were concrete indications of dangers in traffic and where they were absolutely necessary.
Against it the Berlin senate had inserted complaint in the express procedure, on which the OVG still must decide. As long as however the cycle tracks may remain, the court decided now. Accordingly the senate had in the meantime submitted the necessary documents. "Taking these documents into account, the decision of the Administrative Court is most likely to be flawed," the OVG announced on Tuesday. 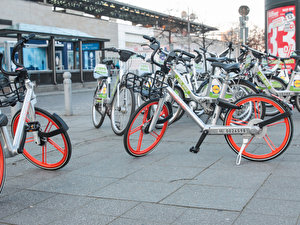 Flexible and environmentally friendly: An overview of the most important operators of bike sharing in Berlin with information on registration and prices. more