Just in time for the planned opening of the capital's airport BER on October 31, its Terminal 2 (T2) has also been completed - but it will not be needed for the time being due to the low passenger numbers during the Corona crisis.

"FBB will therefore probably not put the T2 into operation until the 2021 summer flight schedule," announced Engelbert Lütke Daldrup, head of the Berlin-Brandenburg Airport Company (FBB), on Friday. "By then we can save half a million euros per month. With passenger numbers rising again, Terminal 2 will be ready for operation within a very short time".
In contrast to the main terminal T1, the construction of T2 was not carried out by the airport company itself, but by a general contractor, the company Zech Bau. It was unclear to the very end whether the building, designed to handle around 6 million additional passengers a year, would be ready in time for the opening.
The capacity of the T1 is estimated at 27 million passengers per year. If the airport had been opened at full capacity and without the T2, it would have been narrow. Last year, Berlin Airports counted around 35 million passengers. This figure had collapsed drastically during the Corona crisis. 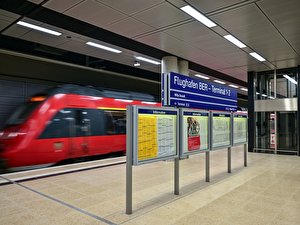