The Friedrichshain-Kreuzberg district wants to calm traffic in the Bergmannkiez. A 500-meter long section of Bergmannstrasse is to be closed to cars and motorcycles, the district authority announced on September 15, 2020.

One-way streets and speed 20 zones will be established in the surrounding streets. "The supremacy of the car and the era of the car-friendly city are over," said District Mayor Monika Herrmann (Greens).

The Bergmannstraße between Nostitzstraße and Schleichermacherstraße is to be closed for cars and motorcycles. Delivery traffic between 6.00 and 11.00 am remains possible. The district office speaks of establishing a pedestrian zone, but there will also be a two-lane cycle path. "The Bergmannkiez will be our model project for the neighborhood of the future," they said. In 2018, benches and plants had been set up on the street for testing. Green dots were supposed to calm the traffic, but they caused ridicule.

The street in the nightlife district is now to be made "climate-resilient", as it was called - by combining green spaces and water elements, rainwater is to be filtered, temperature regulated and insects provided with a habitat. It is still open when the redesign will begin. Next week, the district parliament is to discuss the decision of the district authority.

Test in Mitte is already running

In a model test, a section of the Friedrichstraße in Mitte is currently also closed to cars. The reason given there is to attract more customers to the stores. 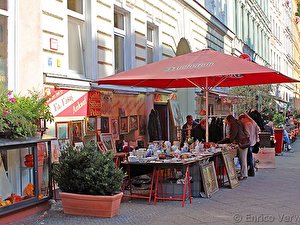 Bergmannstrasse is a multicultural boulevard with Wilhelminian charm. In Kreuzberg, the street is especially popular for the international stores, cafés and restaurants. more