Art, culture and nature should come together in the Spreepark: In the former GDR amusement park in Berlin's Plänterwald, a first test run will start this week. Plastic dinosaurs are located in the former amusement park "Spreepark" in the Plänterwald in Berlin. In the background you can see the big wheel of the Spreepark.

After a citizens' event on Wednesday evening (September 9, 2020), several events are planned from Thursday to Sunday, as the environmental administration and the project developers of Grün Berlin announced on Monday. The art and culture scene will have the opportunity to test their own formats in the Spreepark for the first time, they said. For the citizens' event with environment senator Regine Günther (Greens) one has to register, for dates like Open-Air-Theater and panel discussion tickets are required.

Meanwhile, preparations for a restart are progressing on the site. About two weeks ago, Grün Berlin announced that development work for gas, electricity, wastewater and IT, for example, began. This work on the approximately 23-hectare site is expected to take about a year and will form the basis for the start of construction work. After several years, two phases of citizen participation have now been completed - trial operation is one of the ideas. However, it will take some time before the plans for the future park become reality: The central area around the Ferris wheel is scheduled to open in 2024. Visitors should also be able to enjoy the view in the gondolas again. According to Grün Berlin, the Giant Ferris Wheel must first be dismantled and inspected (start in early 2021).

Remains of other former rides are to be preserved: According to the plan, the former white-water ride will be accessible. "The completion of the overall project is scheduled for 2026," explained the environmental administration and Grün Berlin. A smaller area around the "Eierhäuschen", whose renovation began in 2019, is scheduled for completion in 2022: An excursion center with a beer garden, exhibition rooms and residences for artists are planned in the building on the Spree. "The Spreepark is a magical place and will continue to be a place of inspiration in the future," explained Stefan Tidow, State Secretary for the Environment and Climate Protection. "The park is there for everyone, it will offer recreation in everyday life and stimulating cultural events in the countryside. The trial run this week is a first test run, during which the Spreepark will be experienced in a new way". 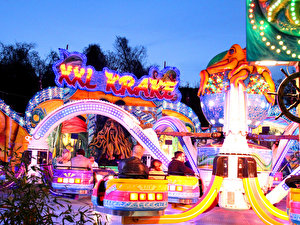