A small firework display just before midnight. A few dozen fans in ecstasy, cheering their heroes at the stadium exit - and a beer shower for the coach: For 1 FC Union Berlin, the party time has just begun, if with the severely limited possibilities due to Corona. "I won't tell you how we are celebrating," said President Dirk Zingler. The rookie did it. Two matchdays before the end of the memorable season, the Union parties have in any case extended their stay in the Bundesliga by one season. "When you've made it, when you've crossed the finish line, it's just a great feeling," said coach Urs Fischer. The 1:0 (1:0) against SC Paderborn brought the longed-for and final certainty.
"Above all, it is a huge thing for those who are setting off fireworks back there that this club is now entering its second year in the Bundesliga," emphasised managing director Oliver Ruhnert. By staying in class, the players also wanted to thank their fans, who normally turn the stadium An der Alten Försterei into a football experience park. In Corona times, all they had left was their home TV or the forest around the place of worship - once again, a few followers had scattered among the trees and supported their team from there.
In the second half, however, the pros could have used all the fans in a sold-out stadium when the lead through the own goal of former Berlin player Ben Zolinski (27th minute) shook a lot. When they had defended the lead until the final whistle with great commitment and a bit of luck, the fans were missing to celebrate. "Of course we're very happy and we're delighted. But the feeling was also a bit strange", said Robert Andrich: "Everyone doesn't know what's right, you don't have that feeling of happiness on the outside".
With 38 points, Union is a safe bet above 16th place, as they all know. And I don't want it to stay at that score. "You set yourself a clear goal at the training camp in Austria, where I said: very ambitious, actually. Now only two points are missing from the clear goal," Ruhnert explained.
That they could possibly be ahead of their city rivals Hertha BSC in the final standings, after the initial drive by new coach Bruno Labbadia seems to have fizzled out and the Hertha team have 38 points after three consecutive defeats, was of little interest to Fischer that evening. "I think in two or three days things will look a little different," added the 54-year-old Swiss, however. 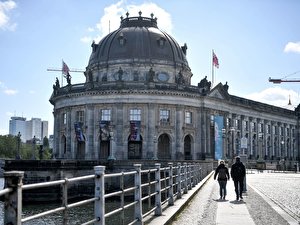 After the opening of the first State Museums, five more houses of the Prussian Cultural Heritage Foundation are due to reopen their corona-locked doors in June. more