After a cooler and rainy weekend the Berliners and Brandenburgers can expect rising temperatures again. At present, a low over the North Sea with highs around 20 degrees Celsius still determines the weather in the region, the German Weather Service announced on Sunday (7 June 2020). A mix of sun and clouds with similar temperatures is also expected on Monday, but without significant precipitation.

Mix of sun and clouds until the weekend

On Tuesday the DWD expects cloudy, partly sunny weather and no rain. Temperatures will remain above the 20 degree mark. A denser cloud cover, however, is expected on Wednesday, only in the north of Brandenburg are cheerful sections expected at times. It will remain dry for the most part, from Lower Lusatia to the Spreewald there may be some rain in the evening. The maximum values hardly change compared to the previous days. Heavy clouds and occasional rain with a maximum of 23 degrees Celsius are announced by the weather experts for Thursday.

Up to 30 degrees on weekends

Looking ahead to the coming weekend, it is evident that it can be up to 30 degrees. A so-called "sheep's cold", which normally occurs between June 4th and 20th, is therefore not expected in the next few days, the DWD meteorologist added. 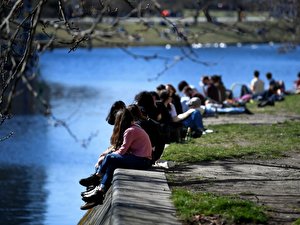