Meng Xiang and Meng Yuan: Panda cubs are both male

Meng Xiang and Meng Yuan: Panda cubs are both male

Media hype and diplomacy in the zoo: 100 days after the birth of the panda twins, the Berlin Zoo announced the sex and names of the young animals on Monday (9 December 2019).

The panda twins in Berlin Zoo are both male and were given the names Meng Xiang ("longed-for dream") and Meng Yuan ("fulfilled dream"). This was announced by the zoo on Monday, 9 December 2019 - according to Chinese tradition 100 days after the birth of the cubs, which now weigh around six kilograms. Both were presented to the media in the zoo. They had made themselves comfortable on heating mats. The boys, as Director Andreas Knieriem called them, will not be seen by visitors to the zoo until 2020.
The twins were born on 31 August 2019. After earlier unsuccessful attempts with other couples, it was the first panda birth ever in Berlin. According to the Chinese ambassador, there had never been a panda birth in Germany before. Worldwide only 60 pandas were born this year, 57 of which survived. 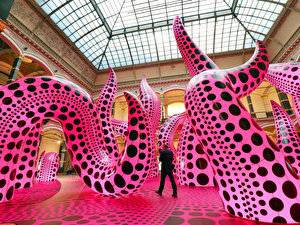