First a blink, then a wink: Around six weeks after their birth, the twin panda cubs at the Berlin Zoo opened their eyes for the first time.

First, the younger of the two cubs looked at mother Meng Meng for the first time while cuddling, the zoo announced on Friday, 18 October 2019. A short time later the older twin also opened its eyes. The two bears each weigh a good two kilos and are now about 30 centimetres long. Since their birth they have slowly grown the typical black and white coat.

What exactly the two cubs can now perceive with their button eyes is difficult for nurses and veterinarians to judge. What is certain is that their vision will grow steadily in the coming days and weeks. The zoo expects the two of them to start walking purposefully soon.

Sexes and names will be announced soon

For the Berlin Zoo it is the first panda birth. The 90 kilo bear Meng Meng showed herself to be a loving mother from the very beginning. Visitors are expected to see the young family at the end of the year. Then the zoo will also announce the names and sex of the cubs. Pandas are born very immature - deaf, blind and only as big as guinea pigs. 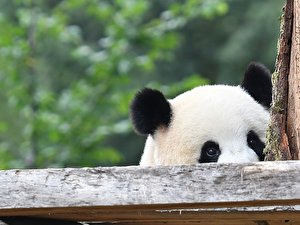 The Chinese giant pandas "Meng Meng" and "Jiao Qing" have been on display at Berlin Zoo since 6 July 2017. more