Tens of thousands of young people in Berlin and Germany want to follow the call of the movement "Fridays for Future" on 29 November 2019 and take to the streets for the climate march. Many different organisations also appealed to all adults not to go to work but to demonstrate instead. Several demonstrations are planned in Berlin on that day. 50,000 participants registered with the police but many more are expected to join the protest.

After a kick-off rally at the Brandenburg Gate at 12 noon, the demonstration will make its way through Berlin-Mitte under the motto "#AlleFürsKlima" around 1 pm. The finish line is then again the Brandenburg Gate, where a closing rally with music and speeches is planned. The climate strike ends at around 4 p.m. in the afternoon. The route leads via Ebertstraße, Behrenstraße, Glinkastraße, Neustädtische Kirchstraße, Reichstagufer, Friedrichstraße, Reinhardtstraße, Luisenstraße, Wilhelmstraße, Scheidemannstraße, Yitzhak-Rabin-Straße and Straße des 17. Juni back to the landmark. 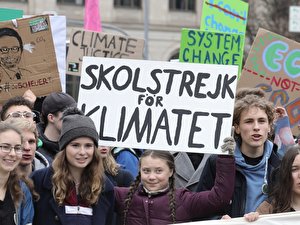 Photos of the climate strike «Fridays For Future» on 29 March 2019 with Greta Thunberg at the Brandenburg Gate. more