The Berlin Zoo started its anniversary weekend with the cutting of a huge birthday cake with animal motifs: 175 years ago, on 1 August 1844, Germany's oldest zoo opened its doors for the first time. The 175-year anniversary is celebrated until this Sunday. The more than two metre high cake is a challenge for the first anniversary guests: Their uppermost layers can only be climbed with a ladder.
"The Berlin Zoo has accompanied Berliners through all the ups and downs since its opening," said Berlin's Governing Mayor Michael Müller (SPD) on the occasion of the anniversary on 1 August 2019. The zoo is loved and its animal stories still move the city today. The zoo also received many congratulations from its fans via social media.
Once donated by the Prussian king, the Berlin Zoo reflects a lot of German history: from colonialism to the Nazi past past, destruction and reconstruction, competition with the zoo during the Cold War and today's species protection concept. Its most beautiful sides are now also immortalized on the birthday cake: pandas, polar bears, flamingos, hippos and the elephant gate to bite on.
Today, the zoo houses more than 20,000 animals, making it the richest in species in the world. It celebrates its 175th birthday with special guided tours through the food kitchen and classical concerts near zebras and seals: It is no coincidence that the "Carnival of the Animals" by Camille Saint-Saëns can be heard. 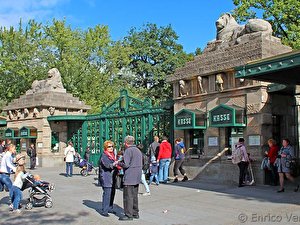