More than 120,000 visitors at Nolde exhibition

More than 120,000 visitors at Nolde exhibition

The view of Emil Nolde as a supporter of National Socialism continues to attract numerous visitors to Hamburger Bahnhof. A man walks through the exhibition "Emil Nolde - A German Legend. The Artist during the Nazi Regime".

On 30 July 2019, Udo Kittelmann, Director of the National Gallery, and Christian Ring, Director of the Nolde Foundation Seebüll, welcomed Sophie Noblia from France as the 120,000th visitor to the exhibition which has been running since April in the Hamburger Bahnhof Museum.
"Emil Nolde - A German Legend" can be seen until 15 September. The exhibition shows the artistic work of the Expressionist Nolde for the first time on the basis of new insights in the historical context of his biography and ideological attitude. Although Nolde was defamed by the Nazis as a "degenerate artist," he was also a member of the Nazi party, an anti-Semite, a racist, and a convinced National Socialist until the end of the Nazi era. 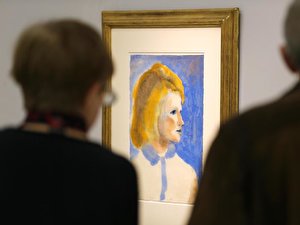 The exhibition "A German Legend. Emil Nolde and the Nazi regime" at Hamburger Bahnhof invites visitors to understand Nolde's art in its historical context. more 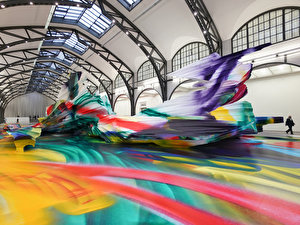