Demonstration and celebrations at Walpurgis Night

Demonstration and celebrations at Walpurgis Night

Demo, Walpurgis Night and Dance into May: Berlin is getting in the mood for Labour Day on Wednesday.

Berlin is getting in the mood for 1 May this Tuesday already. In the afternoon, leftist groups will march through the Wedding district to protest against high rents. The demonstration under the motto "Hands off Wedding" starts at 5 p.m. at Leopoldplatz. The police are present but believe it will be peaceful.

On Tuesday evening, thousands of people will be celebrating at Mauerpark in Prenzlauer Berg as well as in other parks in Kreuzberg and Friedrichshain. An official celebration in the Mauerpark, however, was cancelled by the organizer. At the same time, far-left activists plan to meet at the corner of Rigaer Straße and Liebigstraße for Walpurgis Night. At earlier Walpurgis Night parties in the area, property was damaged and police officers were attacked.

The holiday on Wednesday 1 May 2019 begins with the big demonstration of the trade unions. Thousands of people walk or ride their bikes, roller skates or motorcycles in the morning from Hackescher Markt to the Brandenburg Gate. At noon there will be a satirical demonstration of left-wing groups in the villa district Grunewald. The protest is directed against high rents and the business with apartments.

Highlight in Kreuzberg: the Myfest

In the afternoon the big street festival Myfest begins in Kreuzberg with tens of thousands of predominantly young people celebrating. 1600 policemen will be there to ensure a peaceful course of events. The police set up two car traffic barriers, also as protection against terrorist attacks. For this reason, large plastic cubes filled with water are once again used as blockades on access roads and bridges.

"Revolutionary 1 May" this year in Friedrichshain

In the evening at 6 p.m. left-wing extremist and left-wing autonomous groups want to march through Friedrichshain with the usual demonstration "Revolutionärer 1. Mai". According to the police, it will not be decided until the same evening whether the unannounced demonstration will be allowed to walk past the previously occupied and now still contested houses in Rigaer Straße. The decision depends on the number of participants.

There will be almost 5500 police officers on May Day in Berlin, some of whom come from other federal states and from the Federal Police. 2000 police will be working in Friedrichshain alone to prevent outbreaks of violence like in Kreuzberg. After the Kreuzberg demonstration in the evening with more than 10,000 participants, there are usually street battles between rioters and the police. In recent years, the situation has become increasingly calmer. 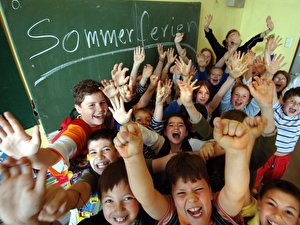 Dates for all public holidays and school holidays 2021 and 2022 in Berlin. more